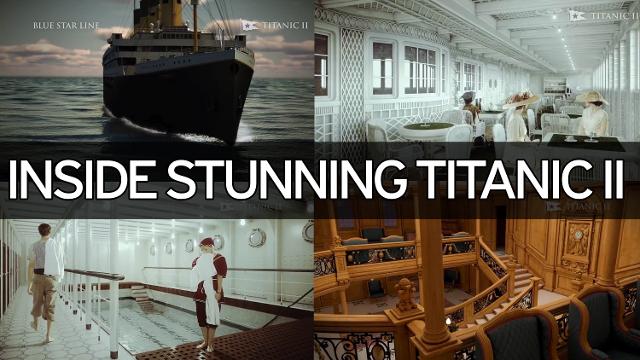 Titanic II ship is the much expected and awaited ship around the world. It was due in 2016 but the developer cancelled it by 2018 and again announced to launch in 2022. It was first announced by the Australian billionaire Clive Palmer in April, 2012. The construction of Titanic II ship was delayed and the final launch date was set to 2018 and again final launch date is changed to 2022. Earlier the launch date was set to 2018 when it was announced in previous press conference.

In recent press conference by the billionaire Clive Palmer, the launch date again scheduled to 2022. The construction of titanic ship replica recently resumed after a financial dispute held up the $500 million project for several years.

According to the latest reports, Titanic II ship will cost about $500 million. It will be considered as one of the most expensive cruise ships in the world.

In recent press conference by the billionaire Clive Palmer, the launch date of Titanic II ship is changed to 2022. A large number of passengers are waiting for titanic release date and we too!

In the first announcement, Blue Star Line announced that, they were going to launch Titanic 2 ship in 2016. Due to some issues, the company couldn’t launch the cruise ship. Again, they scheduled the launch to 2018.

However, in recent press conference, Clive Palmer announced the launch date to 2022 and the construction work is resumed.

Later on, the cruise will take the historic route of the original Titanic ship between England and the US.

Blue Star Line has released the photographs of the expected cruise ship.

According to official Twitter handle of New Titanic, the construction of new Titanic aka Titanic II Ship is going on in Daying county, Sichuan, China. The photographs are given as above. More latest news are given below.

Based on latest news about Titanic II ship, it will carry almost exactly the same number of passengers and crew to make it more original. However, the safety features and navigation system will be modern and plenty of lifeboats.

Titanic II ship tickets rates / Titanic 2 ship tickets are not announced yet. The maiden voyage is schedule in 2022.

We didn’t hear anything from Clive Palmer, the Australian billionaire who first announced about Titanic II ship in New York’s luxurious hotel. However, a Chinese company is building a replica of Titanic ship. We are looking for more information from their part. We will update more news soon.

We have tried to collect more information regarding Titanic II Ship, but there is no more updates from the official website or any other source.

As per information gathered online, we have found that, the construction of Titanic II ship is going on in full swing since 2016. Later on, the news were related to Chinese’s own Titanic II replica.

Questions Asked by Our Readers

Q1: How much did it cost to ride the Titanic?
Answer: The final ticket prices for Titanic II Ship is not announced yet.

Q2: What is the sailing date of Titanic II Ship?
Answer: The final sailing date is yet to be announced by the parent company.

Q3: How many boats new titanic will have?
Answer: Based on news reports, Titanic II Ship will have enough number of life saving boats.

Q4: Are they really making Titanic 2 Ship?
Answer: It’s a difficult question to be answered. We don’t know the current status of Titanic 2 ship construction.

Q5: When is Titanic 2 coming out?
Answer: We don’t know the exact date of Titanic II launch but based on media reports, Titanic 2 Ship is scheduled to sail in 2022.

Q9: Where to reserve / book your tickets for Titanic 2 Ship?
Answer: The company is not taking any titanic 2 booking right now. Just wait and watch!

Q10: Is there a second Titanic ship being built?
Answer: A Titanic II replica is also being built in China by another company which will be permanently docked within a reservoir.

Q11: Are they making a titanic 2 ship?
Answer: Yes, Clive Palmer’s company is going to build Titanic 2 ship but launch date is not fixed yet.

Q13: When did the Titanic 2 set sail?
Answer: No information available.