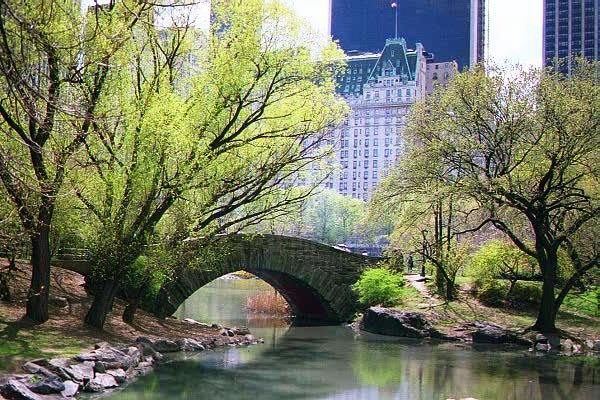 New York is one of the best tourist destinations in the United States. It is impossible to visit the whole city in a few days. Still, if you have less time, then we have compiled a list of the most popular tourist attractions in the city of New York. It is also a difficult task to list top 10 tourist places in New York because the city has so many tourist landmarks, compete with each other.

Central Park is a beautiful public park, located in Manhattan in the city of New York. It is one of the oldest urban parks in the city of New York, which was created in 1857. You should not miss a chance to do boating, watching birds and walks on the grass-roots. The park has also so many entertainment options such as public theater, metropolitan opera and many more. The Central Park has also so many tourist attractions such as Flora and Fauna, Ice Skating, Swimming, Bicycle Racing, Rock Climbing, Zoo and much more.

Times Square is one of the most popular commercial intersections in the city of New York. It is located in the borough of Manhattan and renamed after the New York Times moved its headquarters to the square. Time Square is a must to visit place during the celebration of Christmas and New Year’s eve. Times Square will provide you the never forgettable memory in your life. It is also one of the most visited tourist attractions in the United States.

The Metropolitan Museum of Art is one of the largest art museums in the world, located at 1000 5th Avenue, New York. It was established in 1870 to showcase the historical art work around the world. As per the official information, there are 2 million art works are showcased in the museum. The museum has a great collection of art such as European paintings, Asian art, Islamic art, the American art, Greek and Roman art, Egyptian art and much more.

The National September 11 Memorial & Museum, which was created after the attack on the world trade center on 11th September, 2001. The museum is located at 200 Liberty Street, Manhattan in New York. The museum exhibits more than 500 hours of video, 23,000 photographs, 2,000 oral histories and 10,300 artifacts.

The St. Patrick’s Cathedral is a Roman Catholic cathedral church, located in the 5th Avenue, New York. It is also one of the oldest Roman Catholic cathedral churches in the city of New York. The church is decorated in a Neo-Gothic-style. The church has a beautiful architecture and interior. It is the best place to visit in the city of New York during the masses, especially at Christmas and new year.

The Museum of Modern Art is the first dedicated museum to the modern art in the city of New York. It was founded in 1929 to promote the contemporary art in the United States. The museum exhibits more than 70,000 artists and a collection of over 300,000 books and periodicals. In addition, the museum also host to an impressive collection of prints, design, painting, sculpture, architecture, books and electronic media.

Rockefeller Center is one of the most visited tourist attractions in the city of New York during the celebration of Christmas and New Year’s Eve. It is located in midtown Manhattan, spanning between Sixth Avenue and Fifth Avenue. The center covers about 22 acres of land and 19 commercial buildings are located in the area.